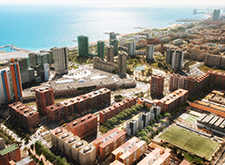 Appetite for real estate in Spain’s second city Barcelona and the surrounding region of Catalonia is extremely healthy, according to experts.

“Barcelona is one of the most attractive cities in the world for investment and living in, so there’s no reason to expect investment to decline,” said Enrique Losantos, Executive Director of a major international real estate agency, based in the city. “Despite the political instability, the real estate market has never been so good.”

Prices across Catalonia have risen by more than 5 per cent over the past year – the region includes Girona, Lleida and Tarragona in addition to Barcelona.

Tourism figures to the city are soaring, with more than 32 million visitors each year and a remarkable fifth place in the ‘World’s Best Cities’ table, compiled by a global consultancy, based on its environment, facilities and amenities together with its arts, culture, entertainment, shopping and food.

Stijn Teeuwen, founding director of Barcelona-based agency Lucas Fox, added: “The market in Barcelona is sufficiently solid and attractive to continue getting the attention of investors in the medium and long term.”

GRE Assets invested in Barcelona in 2013, at a time when the Spanish market was subdued after several years of falling employment and economic performance. Since then, the company has successfully developed two projects and has another under way. “Our investors have seen a 30 per cent growth over this time,” said GRE Assets project manager Ignacio Alfaro Tercero. “Barcelona deserves its growing reputation among the best international locations for property investment.”